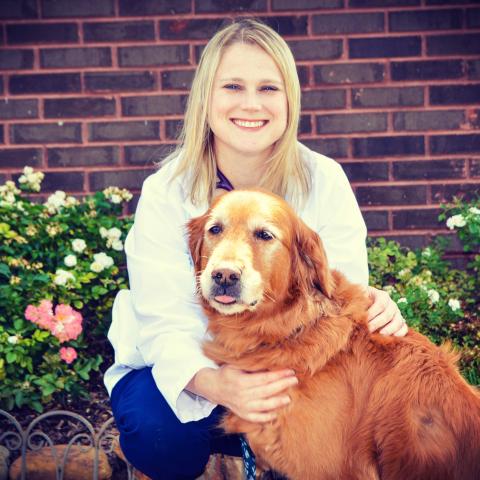 Dr. Horne was a volunteer at the Southeastern Raptor Rehabilitation Center. She then developed a strong interest in raptors and other wildlife. Dr. Horne was also a member of several different honor societies while at Auburn.

Having spent most of her life in Birmingham, Dr. Horne decided to relocate after graduation. The smaller city atmosphere of Huntsville appealed to her greatly. Dr. Horne has been living in Huntsville since starting at the Animal Care Clinic in 2006. Dr. Horne thoroughly enjoys helping both people and pets at the same time. Dr. Horne has a faithful following of clients that love her because she's calm, cool and collected and extremely intelligent. Her special interests include internal medicine, dentistry and soft tissue surgery.

Dr. Horne has a golden retriever, Maddie, and a cat named, Fluffy. In 2013, Dr. Horne married and in July of 2014, she gave birth to two twin girls, Addison and Tenley, and in December of 2015, she gave birth to her son, Hayden. Dr. Horne enjoys chasing after her three young children! When she isn't busy being a mother and a doctor, she likes to read, travel and catch up on much needed sleep!